Personal identity, the identity of a sculpture, animalism, psychologism, and necessary parts. 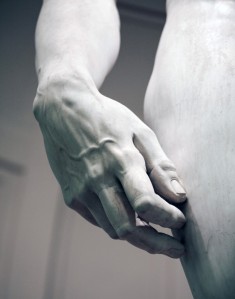 Suppose a famous statue, say, Michelangelo’s David, was in need of restoration. The marble under the base was rotting (let’s just assume marble can rot). So the restorers dig out the rotten section, a part that would be completely invisible, and find that it goes deep. They have to hollow out the legs and torso and pretty much the entire statue. They never touch the surface, and from the outside the statue looks exactly the same. All the marks of Michelangelo’s work are there, and every surface element is the way it is because Michelangelo sculpted it that way. But the inside is completely gone. To stabilize the statue they refill the inside with a powdered marble and some fine liquid adhesive, which sets, providing what is essentially a new marble interior that bonds perfectly with the shell of the statue. Though the surface layer is untouched, the vast majority of the statue’s mass has been replaced, but of course, it was mass that was never seen by viewers.

Is this the same statue?

Suppose instead that the surface of the statue is rotting. Restorers carefully, piece by piece, remove the surface, but only the surface layer (say, no more than 1cm of depth). They replace it with replica finished by contemporary restoration experts, who are, of course, highly trained sculptors. In the end, it would be very hard to tell the difference between the pre- and post-restoration statue. The great bulk of the statue, of course, is unaffected: it’s only the thin surface layer, the parts that Michelangelo touched, that are affected.

Is this the same statue?

The continuity of the statue in the first case is perhaps analogous to what psychological identity theorist, or those who hold that the person is the brain, would hold about persons. Though the vast majority of the matter is removed, the person or statue retains identity, because there’s a special, relatively small part, which carries what is essential to identity.

The continuity of the statue in the second case is perhaps analogous to what an animalist would hold: the majority of the mass of the statue is undisturbed, and the statue would be able to continue to support its own weight, just as the person’s body remains undisturbed, and is capable of carrying on basic functions, if the cerebellum were removed and replaced with a duplicate. The persistence of the major, structural elements is what’s important, not the small element that is commonly (though, according to the animalist, mistakenly) thought to maintain the identity of the statue or person.

My guess is that almost everyone would say that it is the same statue in case 1, because what makes it the David are the elements that Michelangelo worked on. So, again I’m guessing on general response, the convention concerning the meaning of “same statue” is probably tied into the marks made by the artist. In the second case, I think there’d be more disagreement. This would correspond to studies on what people think counts as same person; they generally think of persons as constituted by mental content.

One important thing to note: a poll is not the same as metaphysics, but a person is very different from, say, an electron. The term ‘person’ is the result of social agreement about language usage over many years. Persons were not discovered and discovered in the way electrons were, and what does and doesn’t count as a person or the same person is subject to a lot more force of convention than what does and doesn’t count as an electron. So we do need to be sensitive to common usage, because if we wind up with a version of ‘person’ that is strongly at odds with that usage, we may well no longer be talking about persons, but about some other thing that we have invented for the purpose of, say, a consistent philosophical position.

This entry was posted in Uncategorized. Bookmark the permalink.